The Grenfell tower fire in London in mid-June was very tragic and resulted in 79 deaths. This terrible occurrence has highlighted the extremely negative impact that the choice of building materials can have. There have not been many significant advances in construction materials recently. The Colosseum in Rome was largely built with concrete, terracotta roof tiles were used on the temple of Apollo in Corinth in 700 BC, and plasterboard was invented in 1894.  We see that due to the lack of advances in construction materials, a perception has developed that all building materials and construction techniques are safe and have been tested over centuries.

As a former building products analyst at a large US investment bank I have more than a passing interest in construction materials. In this week’s piece, we are going to look at the impact that plastic-based aluminium composite cladding may have on Australian direct property investors, and who is likely to pay the remediation costs when building materials go wrong. Looking at past examples, the home owner invariably has borne most of the costs for decisions that were not made by them. 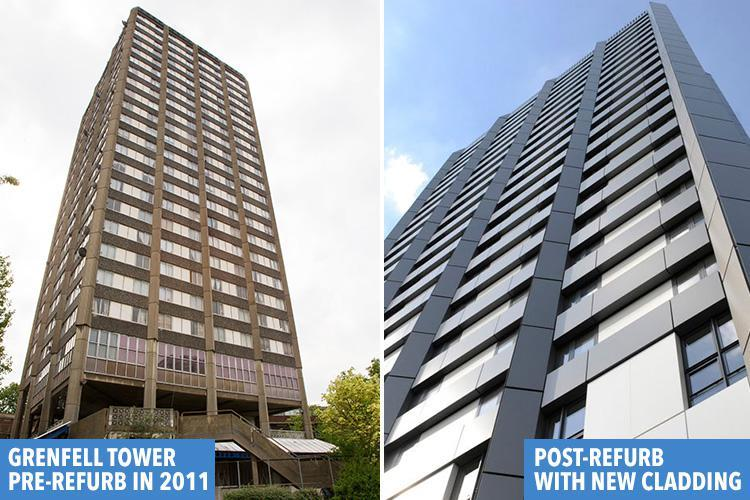 Cladding is added to a building to prevent rain from entering the building’s structure, to improve sound and thermal insulation, and in many cases to improve the exterior aesthetics of a building. Aluminium cladding consists of two thin aluminium outer layers bonded to a mineral fibre core such as polyethylene or polyurethane. The issue is that not all of the polymers used in the honeycomb core are fire resistant, and indeed some of the cheaper polymers used are actually very flammable.

If the polyethylene core catches alight, the aluminium skin acts as a chimney to accelerate the fire up the outside of the building.  The composite cladding used on the building in London was responsible for the 2014 apartment fire at Melbourne’s Lacrosse building and a number of fires in Dubai. In the Melbourne fire a cigarette left on a balcony table caused a fire to spread up the 13-storey tower in less than 15 minutes.

Australia
In the wake of the Grenfell fire, the Australian Society of Building Consultants estimated last week that there are 2700 buildings in Sydney utilising aluminium composite cladding, and 50% of the high-rise buildings built in Melbourne over the past decade also use it. The aluminium cladding commonly used in Australia and installed in Melbourne’s Lacrosse building is Alucobest which is imported from China and is cheaper than fire-resistant aluminium cladding such as Alucobond.

Whilst not all of the aluminium cladding used in these buildings is of the flammable variety, investors owning apartments with non-compliant cladding may face significant remediation costs, dramatically reducing returns.  In February 2016 the Victorian Building Authority (VBA) found that 51% of the 170 high rise residential and public buildings around the Melbourne CBD had non-compliant external aluminium cladding. Paradoxically the VBA audit concluded that this did not pose a safety risk.

We would suggest that owners of apartments constructed over the past decade investigate whether the cladding used in the construction of their asset is of the fire-resistant variety. In the case of Melbourne’s Lacrosse building, owners of the apartments are still battling through the courts over who is responsible for the $15 million repair bill.  Based on our crude calculations, this represents a bill of $100,00 per apartment, a significant sum for investors in an apartment building where two-bedroom apartments are being sold for between $400k and $500k. Research indicates that apartments were sold off the plan for ~ $300k in 2010, so the remediation costs may eat up most of the capital gains.

Chinese drywall (plasterboard)
Similar to the abovementioned Chinese made aluminium cladding was the contaminated plasterboard used in residential construction in 100,000 homes in the US between 2001 and 2009.  During the homebuilding boom in the US last decade, there was insufficient local production of plasterboard which caused builders to source Chinese-made plasterboard that also happened to be cheaper. The high levels of pyrite in the cheaper Chinese-made plasterboard resulted in the release of sulphur gas into the home, which is bad for respiration of residents and also causes corrosion of copper pipes in the walls. The remediation costs are quite significant with costs being around US$200,000 to remove and replace the plasterboard on an on a four-bedroom home.

Despite major importers of the plasterboard being companies the giant German building materials company Knauf, affected homeowners were eventually limited to claiming only a tax deduction after replacing the plasterboard.

Who pays? Leaky homes in rainy places
In New Zealand and British Columbia, changes to the building codes in the 1990s resulted in the uptake of building materials and construction methods more suited to the sunny Mediterranean, rather than the rainy South Island of New Zealand or Vancouver where it rains on average 160 days per year. The change resulted in buildings with minimal eves to disperse rain and wrapped in a fashionable textured cladding such as stucco or fibre cement. As water gained entry into cracks in the building structure, the timber frames began to rot and mould developed.

Despite the cause of these building calamities being changes to government construction policies, the owners of the buildings ended up bearing most of the costs of remediation. In New Zealand after many years of litigation and builders going into administration, a bailout package was put together. This the split the costs with 64% covered by the property owner, 26% local council and 10% Federal Government.  In Canada, the situation was even grimmer for property owners, with the best offer being an interest free loan and tax relief.

Whilst many would assume that builders or developers would be responsible for replacing aluminium panels that are susceptible to fire, the above examples strongly suggest that owners of property with this material installed are likely to bear the costs of replacing the problem building materials.