Midway through 2020, the prevailing view was that 2021 was going to be a challenging year for the banks, which were expected to face an unemployment rate above 10%, a 20% fall in house prices and significant declines in lending as the economy was expected to be beset by large company collapses. This scenario would have seen the banks eat through their carefully hoarded capital reserves and probably encouraged by a nervous APRA to issue more equity at deeply discounted prices.

The November 2021 reporting season proved these forecasts incorrect, with bank dividends increasing sharply, loan loss provisions taken in 2020 written back, all banks conducting share buybacks and demand for business and home loans robust. In this piece, we will look at the themes in the approximately 800 pages of financial results released over the past two weeks, including Commonwealth Banks 1st Quarter 2022 Update, awarding gold stars based on performance over the past six months.

Recovering from the Pandemic

The key feature of the November results for the banking sector was the continued recovery in the financial health of corporate and household Australia despite Sydney and Melbourne experiencing months of lockdowns during 2021. Instead of seeing a steep increase in unemployment and falling house prices, thus increasing bad debts for the banks, the unemployment rate has declined from a peak of 7.5% in June 2020 to 5.2% in October 2021. Robust employment combined with low interest rates has seen house prices surge over the past year. CoreLogic Home Property Value Index increased by 20.6% over the twelve months ending in October, led by Sydney houses and apartments that gained 25.2%.

This vast improvement in the outlook saw Westpac, ANZ and NAB continue to write back provisions taken against expected Covid-19 losses, with CBA and Macquarie only recording minimal loan losses. The discrepancy between loan losses is due to the different times that the various banks report their results. NAB, Westpac and ANZ all have September financial year ends, which saw their management teams estimate their expected losses from Covid-19 in May 2020. At this time, bank management teams were facing a bleak and uncertain outlook and consequently made provisions of approximately $2 billion each for expected losses. Additionally, NAB raised $3.5 billion from its shareholders. As Commonwealth Bank has a June year-end, their management team had the advantage of observing a recovering economy and the impact of $311 billion in Australian government stimulus measures.

The below chart shows banking sector bad debts over the past 40 years. In 2021 the combination of increases in employment, sharply rising house prices and record low interest rates has seen bad debts fall significantly.  The recovery from Covid-19 has proved to be faster than the GFC, and nothing like the decade it took the banks to recover from the 1991/92 recession.

Give me my Money Back

Excess capital and share buybacks have been a feature of the recently concluded results season, a theme that would have been unfathomable 18 months ago. All banks have a core Tier 1 capital ratio well above the Australian Prudential Regulation Authority’s (APRA) ‘unquestionably strong’ benchmark of 10.5%, aided by asset sales in wealth management, Covid-19 provisions, as well as low to no dividend payments. This resulted in the banking sector remaining well capitalised, with the capital building as the expected loan losses from Covid-19 have not eventuated.  The second half of 2021 has seen the four major banks buy back $13.5 billion worth of their own shares, with CBA ($6 billion) and Westpac ($3.5 billion) buying back their shares off-market due to a higher level of franking credits which can be paid directly to investors in an off-market transaction. Nab ($2.5 billion) and ANZ ($1.5 billion) have been gradually buying back shares on the ASX,  due to their lower level of excess franking credits stemming from these two banks offshore adventures, which limited the amount of tax paid in Australia.

The rationale for buying back shares is couched around neutralising the impact of lost earnings from divested insurance and wealth management businesses. However, reducing the share count will make it easier for bank management teams to hit the return on equity targets (ROE) as the equity divisor is reduced.  Nab, ANZ and Westpac all have similar levels of Tier 1 capital post their capital management initiatives, with CBA’s current lower level of capital reflecting both a large buyback in 2021 and not taking large loan loss provisions in 2020. As APRA appear content with allowing CBA to have a lower level of excess capital, investors in the other three banks can probably expect further share buybacks in 2022 if economic conditions remain benign.

Net interest margins were a major topic during the November banks reporting season, with the share prices of CBA and Westpac both falling after reporting declining margins. Banks earn a net interest margin [(Interest Received – Interest Paid) divided by Average Invested Assets] by lending out funds at a higher rate than borrowing these funds either from depositors or on the wholesale money markets.

When the prevailing cash rate is 6%, it is much easier for a bank to maintain a profit margin of 2% than when the cash rate is 0.1%.  Falling interest rates reduce the benefits banks get from the billions of dollars held in zero or near-zero interest transaction accounts that can be lent out profitably. However, this cheap source of funding continues to benefit the banks. In their result, Westpac revealed that as of September 2021, the bank held $282 billion on accounts earning less than 0.25% and a further $126 billion paying interest between 0.26% and 0.49%.

The November 2021 reporting season saw net interest margins compress for Westpac and Commonwealth Bank as they competed to take market share off the two Melbourne-based banks. In a competitive market for loans,  Westpac and CBA were able to grow their loan book by offering cheaper rates, though this comes at a cost. ANZ’s margin was broadly stable though this came at the expense of lost market share as the bank struggled to process the elevated level of home loans over the past six months. The banks more heavily exposed to mortgages (CBA and Westpac) traditionally have higher margins than the business banks (NAB and ANZ) which face competition from international banks when lending to large corporates. Westpac posted the highest net interest margin in November with 1.98%. However, this declined over the past six months due to growing market share and borrowers concerned about rising rates shifting to lower margin fixed-rate loans and the bank continuing to reduce its exposure to interest-only loans and loans to investors. While this looks concerning, Westpac’s lower margins will be offset by the growth in its loan book.

Containing growth in expenses has proved challenging for the banks, with low unemployment contributing to wage growth combined with the need to hire more compliance staff after the 2018 Banking Royal Commission. Additionally, compliance teams have grown in response to  Commonwealth Bank and Westpac getting hit with hefty penalties from AUSTRAC for not complying with Anti-Money Laundering and Counter-Terrorism Financing Act 2006.  In the recently concluded results season, Westpac surprised the market after growing expenses by 8%, mainly due to the bank hiring 3,000 new staff to set up new financial crime and complaints handling procedures and meet other regulatory obligations.

While there was minimal discussion around cutting expenses by closing branches, Atlas sees that rationalising the branch network will be the easiest way for banks to grow earnings. On average, the significant banks each have over 1,000 branches around Australia. They have experienced a decline in usage of these branches over the past decade, as most bank transactions are now conducted either online or via smartphones.  In November, NAB reported processing 1,300 digital transactions for every in-person transaction conducted at a bank. Westpac said that it had closed 98 branches over the past year, which should show benefits in coming years. The gold star goes to ANZ, who kept expenses unchanged at $7.4 billion despite higher revenue.

As can be seen in the first table all banks sharply increased their dividends in the most recently completed reporting season. However, for all banks, there was an element of catching up for reduced payments to shareholders in 2020 after APRA placed a cap limiting dividends to 50% of earnings.  ANZ increased their semi-annual dividend by 66% to 72 cents, though this is still 10% below their pre-Covid 19 levels. Macquarie wins the gold star, increasing their dividend by 100%, but what is more important for investors is that the $2.72 paid to investors is ahead of the $2.50 per share paid to investors in November 2019.  As a global investment bank, Macquarie Bank has enjoyed a good pandemic, growing earnings in 2020 and 2021, profiting from market volatility.

Investing in Australian banks is one of the major questions facing institutional and retail investors alike, with the banks comprising 25% of the ASX 200.  We expect the banks to deliver around 5-10% earnings growth over the coming year as earnings continue to recover from the hit from the pandemic. However, growth will be muted by lower credit growth, normalising bad debts and reduced earnings support from provision write-backs. However, if investors examine the wider Australian market, the banks look relatively cheap and are well capitalised. Unlike other income stocks such as Telstra, they should have little difficulty maintaining their high, fully franked dividends.

Additionally, their share prices are likely to see support over the next 12 months from share buybacks. Looking further ahead, Australia’s banks have historically performed well in an environment of rising interest rates. They have seen expanding profit margins by being swift to increase interest rates on loans but slower to increase the rate paid on term deposits and transaction accounts.

This piece originally was published in FirstLinks: Bank results scorecard: who deserves the gold stars? 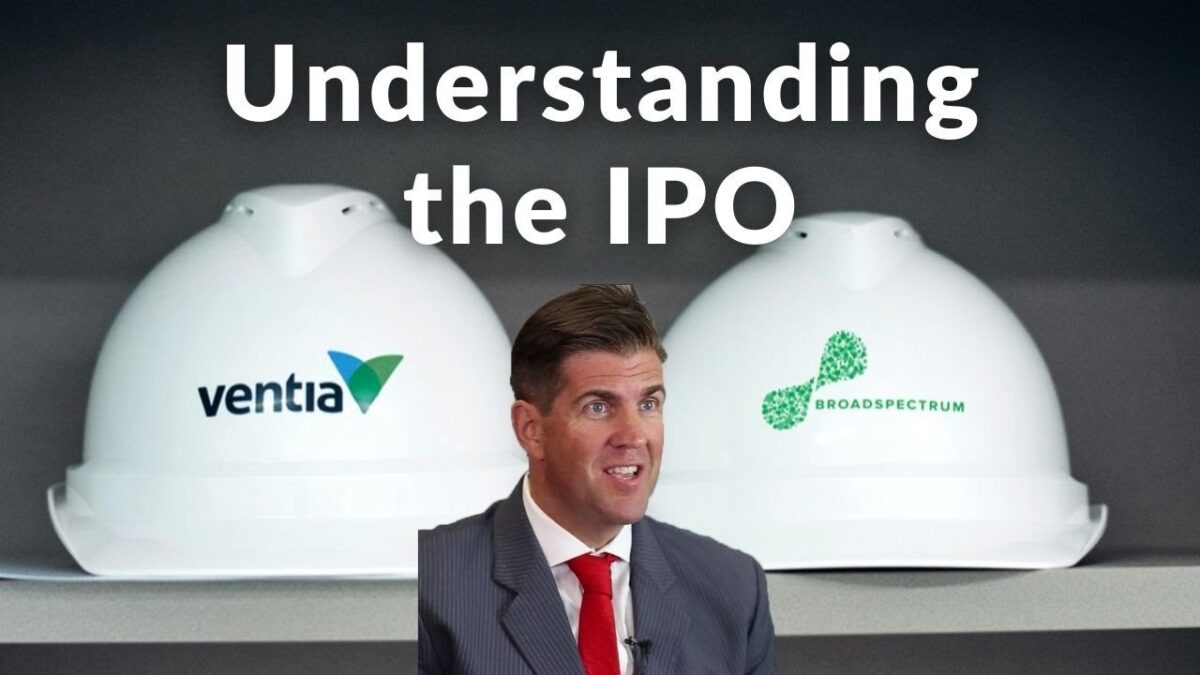 s the Ventia IPO a good buy? We Ask Hugh Dive from Atlas Funds Management to explain the company, financials and how this company stacks up compared to Downer and other private equity listings. Ventia (VNT) is expected to be one of the larger listings with a market value of between $2 billion to $2.5 billion when it hits the boards in late November 2021. We learn the History of VNT that was formed in 2015 through the carve-out and integration of infrastructure services businesses Leighton Contractors Services, Thiess Services and Visionstream in a partnership between CIMIC and funds managed by PE group Apollo Global Management. In June 2020, Ventia acquired Broadspectrum (previously known as Transfield Services) to form one of the largest infrastructure services companies in Australia and New Zealand. Apollo paid $1 billion for their 50% share of VNT in 2014.

Go to Monthly Newsletters for a more detailed discussion of the listed property market and the fund’s strategy going into 2022.

But not every investor is convinced now is the right time to jump back in.

“Obviously iron ore has been under pressure and fallen quite heavily. But the reason I wouldn’t be diving in right now is history shows it could go down a lot further,” Atlas Funds Management chief investment officer Hugh Dive says.https://3b594b9b89a63f00ca614df825e82458.safeframe.googlesyndication.com/safeframe/1-0-38/html/container.htmlAdvertisement

He says much of the big steel manufacturing outside Beijing could be shut down ahead of the 2022 Winter Olympics to reduce air pollution. This is what happened ahead of the 2008 Summer Olympics in Beijing when industrial production was shut down.