Hugh Dive of Atlas Funds Management says the proposal will likely to improve the “overall return on capital” for the Australian conglomerate.

Wesfarmers’ plan to demerge its supermarket business Coles is a ‘good move’: investor

Hugh Dive of Atlas Funds Management says the proposal will likely to improve the “overall return on capital” for the Australian conglomerate.

Normally the semi-annual profit results from the Commonwealth Bank are fairly staid affairs, with the bank delivering consistent profits with few surprises. However, this reporting season the CBA result will face a far greater degree of scrutiny after the annus horribilis of 2018.

In this period, the bank has faced 9 challenges:

4) Settlement with AUSTRAC for $700 million

8) settlement of interest-rate rigging case with ASIC and

When companies confront the range of issues that CBA has faced over the past 12 months, new management teams often have the opportunity to rebase earnings downwards, thus giving themselves easier hurdles to jump over in the future.

The market was quite pessimistic on CBA going into this result and so has been surprised at the +3.7% increase in cash profits and that the dividend was slightly increased.

The 2018 result also showed that the bank had increased their net interest margin [(Interest Received – Interest Paid) divided by Average Invested Assets] from 2.1% to 2.15%. Whilst this does not sound like much, small changes in this margin are beneficial when applied to an asset base of $975 billion.

The expansion in this margin shows that over the past year CBA has been successful in both raising prices on their loans and reducing the interest rates paid to those that lend the bank money such as depositors.

A significant feature in the profit growth that the major Australian banks have enjoyed over the past five years has been declining bad debt charges. Consequently, one of the key financial indicators to look at is a banks’ bad debt charge, as a rise in this charge is likely to indicate the start of a cycle of rising bad debts as these charges normalise to a long-term average of around 0.3% of gross loans. This result showed that CBA’s impairment charge actually fell further to 0.13% over the past six months.

Result was better than we expected

2018 has been a tough year for investors in bank stocks and in particular for CBA shareholders. The prevailing narrative has been a negative one dominated by concerns about the Royal Commission, house prices and exciting fintech companies displacing the banks.

We added to the CBA weight during the Royal Commission and going into the result, as we saw that the market price discounted both the resilience of the CBA’s key profit centre retail banking services and management’s ability to respond to the changing environment.

Our positive investment view towards Australia’s premier retail bank has not changed, though in fairness this result was better than we expected.

What the market was underestimating

Going into this result the market has been overlooking CBA’s ability to pull various levers to maintain profits in response to changing market conditions.

Going into this result the market was expecting contractions in the bank’s net interest margin, due to rising funding costs as measured by the BBSW (bank bill swap rate) and the impact of 2017’s big bank levy.

The below table shows the levers pulled by management to maintain profits, namely raising rates on loans and controlling the rates that the bank pays for retail deposits. Commonwealth Bank investors have questioned the pairing of high-value funds management operations with risky advice and mortgage broking units, but have more broadly welcomed the split of $8 billion worth of wealth businesses into a separate company. 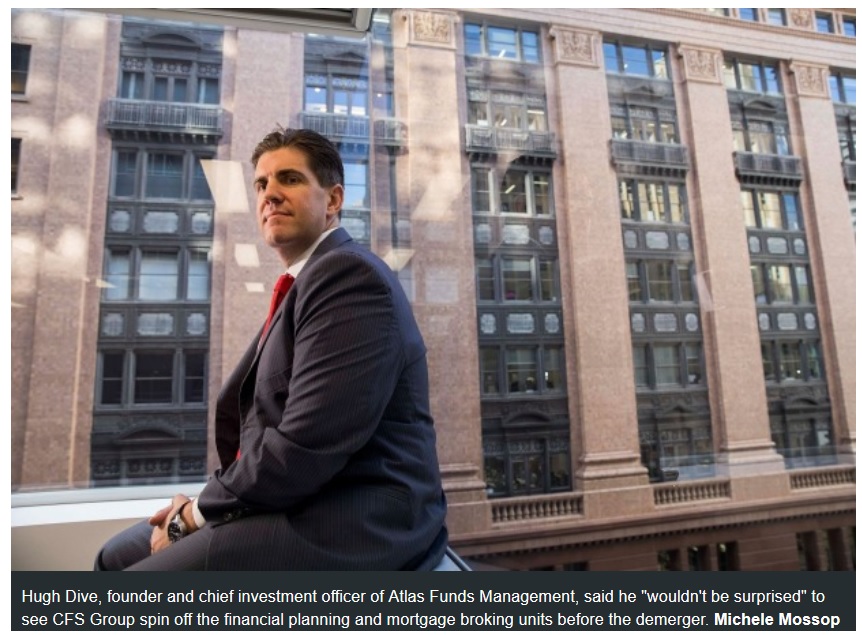 Hugh Dive, founder and chief investment officer of Atlas Funds Management, said he “wouldn’t be surprised” to see CFS Group spin off the financial planning and mortgage broking units before the demerger.

“Whilst Colonial, the funds management business and the platforms, are very good, people will discount the value of the financial planning business,” he said.

“Financial planning is not a great business to be in. Your assets walk out the door every day … the clients have a great relationship with the planner, not with the funds management house.”

Mr Dive, however, said the chances of capital return as a result of an IPO “struck me as a very low probability outcome”.

“That was a supposed disappointment, but we didn’t factor that [capital relief] as a factor at all,” he said.

Commonwealth Bank investors have questioned the pairing of high-value funds management operations with risky advice and mortgage broking units, but have more broadly welcomed the split of $8 billion worth of wealth businesses into a separate company.

Leading boutique financial advisory group Maxim Private Clients today announced that it has appointed Atlas Funds Management as a manager of the Maxim Atlas Core Australian Equity Portfolio. The Portfolio is available as a managed discretionary account on the Hub 24 platform.

The Maxim Atlas Core Australian Equity portfolio is designed for investors seeking a concentrated core portfolio of listed Australian equity companies and that are looking for consistent tax effective distributions above that offered by the ASX 200.

Atlas Funds Chief Investment Officer Hugh Dive said “Atlas are delighted to be associated with Maxim Private Clients; whose ethics and transparent approach to financial advice aligns with our views on how clients should be treated by investment professionals.  Maxim’s customised client service stands in stark contrast to the conflicted advice revealed at the recent Royal Commission”.

Maxim Private Clients is a boutique financial services, and business advisory firm based in Newcastle NSW with clients located along the east coast between Melbourne and Brisbane. We specialize in assisting small to medium enterprise and busy professionals looking for a partner to assist them with all facets of their business and financial life. Maxim Private Clients provides a tailored approach to strategic advice with an emphasis on business and personal structures, financial efficiency and growth. Partnering with Atlas Funds to manage our Australian equities mandate ensures that all potential conflicts are removed from the advice and asset allocation process which is purely focussed on achieving clear and concise outcomes for our selected clients on a fee for service basis.

More information on Maxim Private Clients can be found at https://www.maximprivate.com.au/

Atlas Funds Management is a boutique investment manager based in Sydney that focuses on delivering capital protection and consistent income for individual investors and self-managed superannuation funds (SMSFs).

More information on Atlas Funds can be found at https://atlasfunds.com.au/

Australia’s big four banks have dipped into a “bear market” as investors fret over multiple challenges including falling house prices, a regulatory backlash sparked by the royal commission, and higher funding costs.

He pointed out the flipside of weak credit growth was that banks had less need to set aside capital to support lending, which should underpin dividends.

“In a situation where credit is not really growing very fast, and they sold a lot of businesses, that’s going to return a lot of capital,” Mr Dive said.

Many Livewire reader will be familiar with Hugh Dive author of the well followed and widely read Dogs of the ASX articles. With the latest edition about to d…