The last six months have been stressful for Australian equity investors, despite the calm suggested by the ASX200 delivering a total return of +3.2% (capital appreciation plus dividends). December’s Santa Claus rally/Trump reflation trade went a bit sour in January, similar to the feeling given by excessive consumption of four litre cask white wine from Southern Queensland. The market then staged a recovery from February to April, before grinding down slowly on weaker commodity prices, surprise bank taxes and the potential for higher global interest rates towards the end of 2017.

In this week’s piece, we are going to look at what has happened over the first half of the year, examine some key themes and analyse the catalysts that contributed to the best and worst performers. 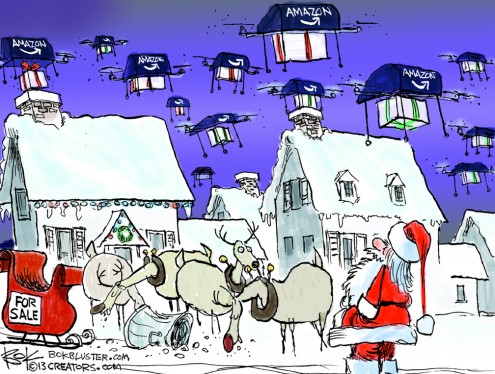 Growth at any price

One of the key themes to emerge in the first half of 2017 has been a willingness among investors to bid up the share prices of companies delivering earnings growth. This activity seemed to ignore the high valuations paid to access these growing profits. This can be seen in the top performing healthcare, utilities and industrial sectors, whose performance was driven by companies such as CSL (Price to earnings ratio or PE 31x), AGL Energy (PE 21x) and Sydney Airport (PE 44x). Whilst these are all very solid companies that I have owned in the past, at current prices they offer little in the way of a valuation “margin of safety” needed when investing in equities.  The wisdom of being circumspect towards fully valued high growth companies can be seen in the performance in 2017 of companies such as Dominos Pizza and TPG Telecom, both of which have fallen heavily when their growth engines began to splutter.

The hunt for yield halts

The two worst performing sectors in 2017 have been the “yield” sectors of telecoms and listed property, though paradoxically the interest rate sensitive utilities sector continued to move higher. The yield sectors have been sold off as the US Federal Reserve increased their interest rate target to 1-1.25% and signalled a further rate rise later on in 2017. For foreign investors, this decreases the relative attractiveness of investing in Australian “yield” stocks such as Telstra (-12%) and Scentre Group (-13%). Domestically the RBA is taking a different stance, holding the cash rate at 1.5% in June and  that a further rate cut could occur later in 2017. 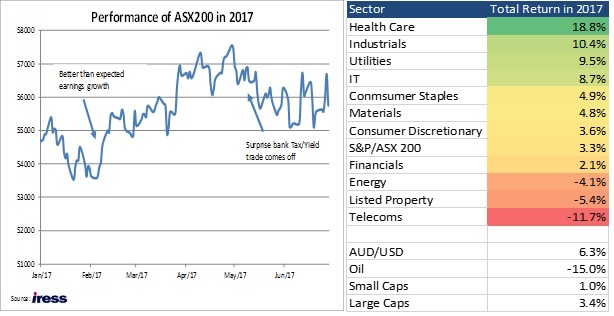 A mixed story for financials

From looking at the above table on the right, financials would appear to have had a reasonable start to 2017, returning a respectable 2% after dividends, however for investors it has been a bumpy ride.  The major banks performed well up until the announcement of a surprise bank levy in the May budget that wiped $14 billion off their collective market capitalisation. Commonwealth Bank (+2%) outperformed ANZ Bank (-4%) and Westpac (-3%), despite the latter two banks reporting in May lower loan losses and profits in line with expectations.

Whilst 2017 has been tough for investors in the banks, the sun shone down on the domestic insurers IAG (+16%) and Suncorp (+12%), as well as the fund managers Challenger (+17%), Magellan (+14%) and Perpetual (+14%) due to a combination of inflows and performance fees. QBE Insurance’s share price (0%) once again went up by the stairs and down by the lift. After reporting a solid result in February that suggested that the company’s turn-around was working, in June QBE unveiled higher than expected claims from its Asian and Latin American businesses, which caused the share price to fall 8%.

Over 2017, the larger companies listed on the ASX (ASX100 +3%) have outperformed the smaller companies (Small Ords +1%). Outside the banks and the energy companies, the larger capitalisation stocks have had a pretty benign 2017, with the average return dragged upwards by the performance of CSL (+29%), Rio Tinto (+12%), Transurban (+11%) and Woolworths (+8%). The key drivers of small capitalisation index underperformance have been the underperformance of mining stocks Oceana (-12%), Independence (-27%) and retailers Premier (-7%) and Super Retail Group (-17%).  Company-specific issues caused falls in vitamin producer Blackmores (-7%) and retirement home provider Aveo (-20%).

Star pupils and the laggards in 2017

Stars and what caused them to shine

In the table above on the left we have listed the top 10 stocks in the ASX 100, and from looking down the list of the stars it is mainly stock specific factors that have driven performance. Qantas benefited from continued falls in the oil price and higher fare prices, whereas BlueScope’s turnaround continues with the steelmaker reporting 200% profit growth in February and announcing a share buy-back. This caps an amazing recovery for a company that was in a very challenging position five years ago, which resulted in a massive equity issue almost 80% below the level at which the company is currently buying back stock.

As mentioned above CSL, Flight Centre, Cochlear and Aristocrat have benefited from the theme of buying earnings growth at any price. Building materials company Boral’s share price has surged based on a recovery in their US business and continued demand for construction materials to fuel the Australian housing boom.

Laggards and their negative catalysts

In every period there are stragglers as well as winners, and on the right side of the above table we have the worst 10 performing stocks. The common theme driving the underperformance of Harvey Norman, Vicinity, and Scentre are concerns that the impending entry of Amazon into the Australian retail market will destroy retailer profitability and result in vacancies in our echoing shopping centres.

Looking through the rest of the list, Santos has followed the oil price downwards, whereas Brambles and Domino’s Pizza have been de-rated on unexpected profit downgrades. The telecommunications sector was a glamour sector in 2016 but has been on the nose with investors in 2017. Increased mobile competition, lower margins, and uncertainty around the NBN have negatively impacted the share prices of Telstra and TPG Telecom.

Looking to the second half of 2017 we see that the market has been predominantly negative on the “Amazon effect” and in August many of the affected companies will have the opportunity to reveal how their businesses are performing. Whilst Amazon has had a significant impact on US retailers and thus the owners of many US shopping malls, we see those concerns as being overplayed (though we are underweight retailers in the Atlas High Income Property Fund). Over the last 30 years the US has added a significant amount of retail floorspace such that it is now estimated at 2.2m² of retail floorspace per capita, this compares with around 1m² of retail floorspace per capita in Australia.

Looking further afield, we expect the banks to show profit growth from the upward repricing of investor and interest-only loans, though it will be a balancing act for bank management teams, as they will find it harder to fight the bank tax with expanding profits.  The resouce companies are likely to report shrinking earnings with commodities drift lower as the effects of Chinese stimulus plans from 2016 continue to fade.   As global rates begin to rise in the back half of 2017, this will put downward pressure on the AUD which will benefit companies with USD earnings such as QBE, Incitect Pivot and Amcor.  In aggregate we expect Australian equities to deliver modest gains in the second half of 2017, mainly as equities continue to present a better investment option to bonds.