The “Dogs of the Dow” is an investment strategy that is based on buying the ten worst performing stocks over the past 12 months from the Dow Jones Industrial Average (DJIA) at the beginning of the year, but restricting the stocks selected to those that are still paying a dividend. The thought process behind requiring a company to pay a dividend  is that if it is still paying a distribution, its business model is unlikely to be permanently broken. The strategy then holds these ten stocks over the calendar year and sells them stocks at the end of December. The process then restarts, buying the ten worst performers from the year that has just finished. In this area retail investors can have an advantage over institutional investors, many of whom sell the “dogs” in their portfolio towards the end of the year as part of “window dressing” their portfolio. This avoids the manager having to explain to asset consultants why these unloved stocks are still in their portfolios.

In this week’s piece written from snowy Norway,  we are going to look at the “dogs” of the ASX, focusing on large capitalisation Australian companies with falling share prices. Additionally, we are going to sift through the trash of 2017 to try to discern any fallen angels with potential to outperform in 2018. 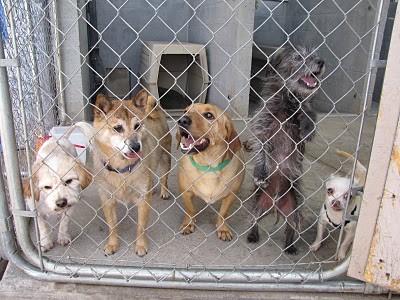 Unloved mutts
The Dogs of the Dow was made famous by O’Higgins in his 1991 book “Beating the Dow” and seeks to invest in the same manner as deep value and contrarian investors do. Namely, invest in companies that are currently being ignored or even hated by the market; but because they are included in a large capitalisation index like the DJIA or ASX 100, these companies are unlikely to be permanently broken. They may have the financial strength or understanding capital providers (shareholders and banks) that can provide additional capital to allow the company to recover over time.

ASX Dogs over the past five years
The table below looks at both the top and bottom performers for the past five calendar years and their performance over the subsequent 12 months. As always this is measured on a total return basis, which looks at the capital gain or loss after adding in dividends received.  Whilst sifting through the trash at the end of the year yields the occasional gem – such as Qantas in 2017 (+65%), Fortescue in 2016 (+223%), Qantas again in 2014 and Challenger in 2012 (+81%) – an equal weighted portfolio of the dogs of the ASX 100 has outperformed the index in three of the past seven years.

Themes
Looking at the above table, finding the fallen angel among the worst performers seems to work best where the underperformance is due to stock-specific issues, rather than macro issues beyond a company’s control. For example, Cochlear underperformed in 2013 after weaker sales as the company waited for approval to sell its new Nucleus 6 product in the United States. Subsequently, Cochlear’s share price has gained 240%,  as hearing implant sales bounced back. Similarly BlueScope Steel had a tough 2015, which saw the company seeking government support to help restructure their Port Kemba steelworks. Concurrently, cheap Chinese steel took market share at the same time as key inputs of iron ore and metallurgical coal were climbing upwards. 2016 saw a significant turnaround for BlueScope’s shares which gained +111% as profits recovered due to cost controls, stronger sales and the benefits of an acquisition in the United States.

The common factor among the underperformers that have continued their slide in the following year is when the underperformance is tied to factors outside the company’s control, such as a multi-year decline in a commodity. From the list of underperformers in 2014, continuing declines in iron ore delivered further pain to Arrium, Fortescue and BHP’s shareholders. Similarly, a several year slide in oil prices pushed down the share prices of Santos and Worley in the subsequent 12 months.

Unloved hounds as of December 2017
As a fund manager the key question is whether there are potential show champions in the breed of unloved canines tabled below for the 2017 calendar year. Unlike previous years a diverse mix of sectors are represented and there are more company-specific reasons for underperformance, which should yield more opportunities to pick some treasure out of the trash.

Looking at the two telcos Vocus and Telstra, it is tough to see the near term catalysts that will transform them into stars in 2018, with the NBN market likely to remain intensely competitive with high costs to migrate customers. Fortescue is likely to continue to face Chinese preference for higher grade iron ore over its lower-grade blends to improve furnace efficiency and reduce pollution. Domino’s Pizza could be a candidate for a turn-around in 2018, now the company is more reasonably valued with multiple avenues for growth across its discount pizza operations in Europe, Australia and Japan and a falling AUD will boost earnings. Similarly Brambles could see a brighter 2018 based on growth in US pallets, management stability and a falling AUD. 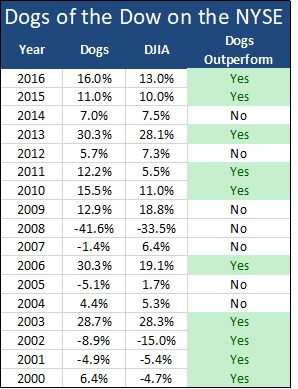 Our View
Whilst the Dogs of the Dow might work in a market populated with a diversified range of companies in uncorrelated industries such as McDonalds, 3M, Merck and Microsoft, it does not appear to be a broad strategy that one can use consistently in the ASX. We see that among the companies in the ASX 100, the composition of the index is not as broad as the Dow at an industry level. The ASX has a high weighting to resource companies, whose profitability is largely tied to commodity prices (such as oil and iron ore) that are outside of management’s control and can be subject to multi-year declines.