Last week it was announced that Slater and Gordon’s former accountant was included in a shareholder class action over its auditing work. This demonstrates the recognition of legal costs as revenue, before the ASX-listed law firm actually won the case. Obviously, this becomes an issue for a company with a business model that is based on “no win no fee”, as their revenue is predominately based on a percentage of the damages awarded when the case is won. In previous years this assumption contributed to the troubled legal firm reporting healthy revenue and profits to investors, although at the same time financial stresses were significantly increasing.

In part one of a two-piece series on financial statement trickery, we are going to look at some measures a company can take to “dress up” their financial results. 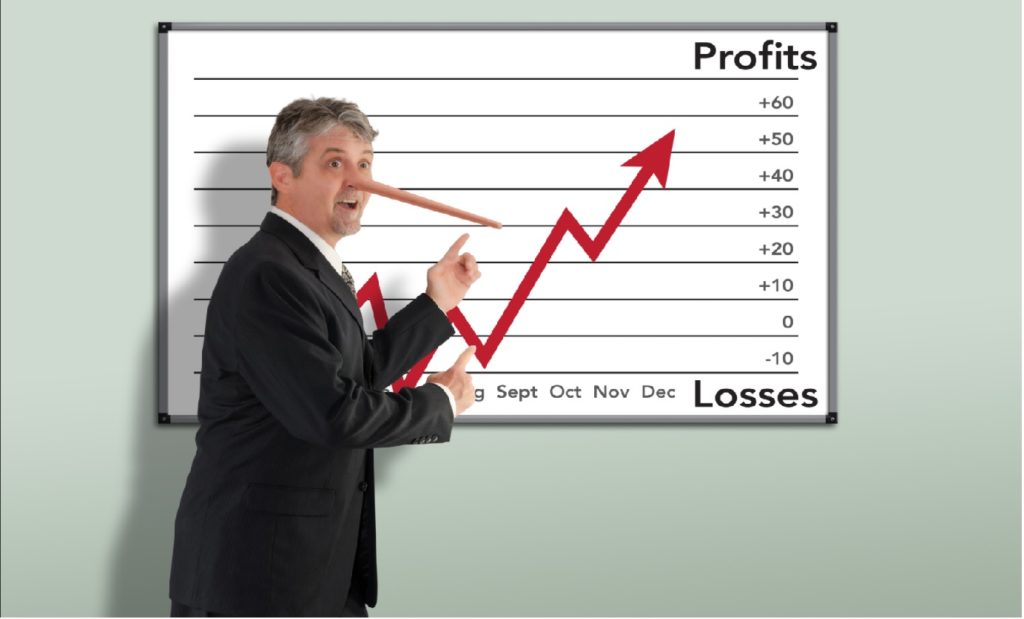 Why engage in earnings chicanery?

Company management teams are always under pressure to deliver results in line with or above market expectations, or face the negative share price reactions. By my observations, negative reactions to earnings disappointments have only increased in recent years with the increasing influence that short sellers have in setting market prices. Their strategy is to sell stock that the manager does not own prior to a catalyst event such as an earnings result. They anticipate being able to buy stock back at a lower price if company profits are below market expectations.

This gives management – in particular the chief financial officer as the executive with central involvement in preparing the accounts – strong incentives to present the most positive picture possible of the company’s financial health. This is especially true if management believes that the negative factors influencing profits could be temporary and likely to reverse in the near future.  Additionally, most senior management teams have short-term incentives tied to earnings growth or total shareholder returns, which can motivate them to present favourable accounts.

When a company releases its financial accounts, these consist of three separate statements. These are designed to provide investors with a picture as to the company’s profitability (profit and loss statement), assets and company solvency (balance sheet), and the cash flows in and out of the business (cash flow statement). All three are interconnected and should not be read in isolation as each statement can explain elements of another. For example the net debt on the balance sheet drives the interest payments on the profit and loss and cash flow statements. Below we take a closer look at each of these statements.

Most of the attention in the financial media focuses on the company’s profit and loss statement (P&L). The P&L provides a six-monthly summary of the company’s revenues, expenses, depreciation charges, interest costs and taxes. The investment community tends to be most concerned about the net profit figure. Whilst this statement provides the headline result, it is also the easiest to manipulate.

A typical way to do so is when companies recognise sales as revenue before payment is actually collected from customers. A more extreme version of this is referred to a “channel stuffing.” Then is where a company makes a large shipment to a customer at the end of an accounting period (recorded as revenue), however the customer may end up returning those goods. In 2005 donut maker Krispy Kreme got itself into hot oil and was forced to restate prior year’s earnings. Here it was proven that the company systematically increased shipments of its sugary glazed treats in the final month of numerous quarters so the company could meet the guidance that it had provided investors.

The balance sheet provides a snapshot of a company’s assets, liabilities and shareholders’ equity at the end of the period. This offer investors an understanding of both how the company is financed (debt or equity), and also what it may be worth if it is liquidated at that point in time. Typical ways of manipulating the balance sheet are by adjusting the value of assets and moving debt off the balance sheet. Enron famously used special purpose vehicles to hold debt outside the company’s balance sheet and misrepresent the company’s gearing. In 2001 Enron’s financial accounts reported total debt of US$10.2 billion, however it was later determined that the real figure was US$22.1 billion.

Closer to home, Harvey Norman in 2017 moved A$610 million of franchisee liabilities off the company’s balance sheet, based on the new position that Harvey Norman is no longer liable for the inventory costs taken on by its franchisees. This sparked a range of commentary in the financial press and prompted ASIC to look at the retailer’s accounts; see the interview Torpedo Tuesday Harvey Norman.

Profit is an opinion, cashflow is a fact

The cash flow statement shows a picture of the actual cash flowing in and out of the company over the past six months and is generally harder to manipulate than the profit and loss statement. Conceptually it is akin to blood pumping through the veins of the corporate entity, with the balance sheet comparable to the skeleton.

The P&L is more often associated with chicanery as a company may record sales as revenue on the P&L, and hence profit, before that cash is actually collected from their customers. However company cash flow statements are also open to manipulation. One practice that I have seen over the years has been capitalising operating expenses as an asset. This converts a cost or outflow of cash on the cash flow statement into an asset on the balance sheet: accounting magic! Whilst this is legal under the accounting rules, as an analyst I was uncomfortable with instances of this conversion, for example Santos capitalising the interest costs for the construction of the Gladstone LNG export terminal. Through the construction process the company’s cash flow statement showed a healthier picture than was actually the case. Ultimately, Santos wrote down the value of this asset by A$2.9 billion and was forced to raise $2.5 billion in 2015 and $1 billion in 2016 to pay down debt.

Aside from converting expenses into assets, a company can boost their cash flow statement by selling accounts receivables (at a discount to face value) or delaying payment of accounts payables. These two actions can temporarily improve the cash flow statement, though they can be detected by abnormal changes to working capital on the balance sheet.

One of the tactics that can be used by owners prior to floating a company is to boost cash flow by economising on capital expenditure, especially the capital expenditure required to maintain a company’s assets. The rationale behind this is to present the healthiest set of accounts possible prior to the initial public offering (IPO), with the aim of generating a high sale price. However, in the year or so after the company is floated on the share market, the new investors end up with cash flows lower than they expected due to higher maintenance capital expenditure.

In the short term companies can economise by delaying capital expenditure, but in the medium term assets have to be maintained otherwise they deteriorate. A tragic example of this was alleged to have occurred with the transport company McAleese Group, where the previous owners were believed to have reduced capital expenditure on trucks in their fleet prior to the IPO. It is alleged that this scrimping on capital expenditure contributed to a range of accidents which resulted in fatalities.

Our Take
Earnings misrepresentation is difficult to for investors to detect from the publicly available accounts, but when revealed can have fairly extreme results for a company’s share prices. Printing these three statements and reading them side by side can often reveal signs of problems a company could have that can be minimised or ignored when management present their results to the market. As the result of bitter experience, I look at the cash flow statement first, as profits can be manipulated and companies with great – albeit illiquid – assets can still become insolvent without the cash flow to service debt.
Atlas Funds Management
Suite 218, 165 Phillip Street,
Sydney, NSW, 2000
Get directions
+612 8304 5190
inquiries@atlasfunds.com.au
ABN 83 612 499 528 | AFSL 491395