Over the past week short selling has been a hot topic in the financial press after a noted US-based short seller released a very negative piece about listed fund manager Blue Sky Alternative Investments (BLA). This caused BLA’s share price to fall 50%, wiping $440 million from Blue Sky’s market cap. Short sellers are frequently derided as vultures, rumour mongers or un-Australian. However, in practice, shorting stocks is a difficult, stressful and lonely way to make money in the market, which is predominately skewed towards good news and wearers of rose-tinted glasses.

In this week’s piece we are not going to look at the merits of Blue Sky as an investment, but rather at the mechanics and issues around short selling equities. We see that much of the coverage on short selling over the past ten days reveals that many of those who hold strident opinions on short selling have only a limited understanding of how it actually works in practice. 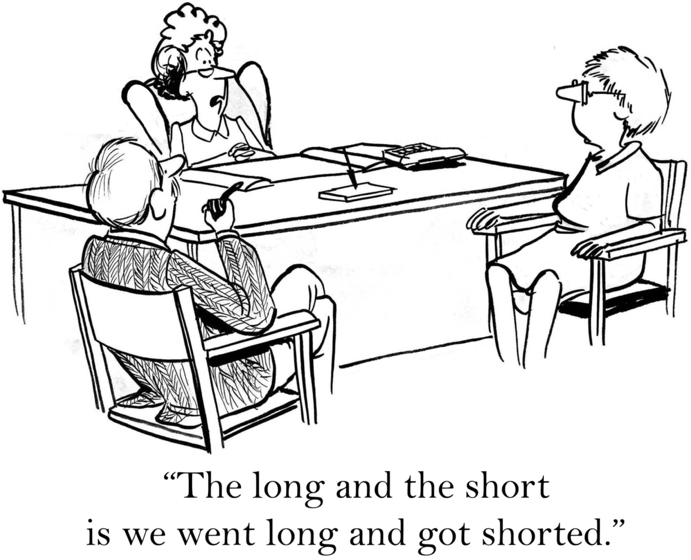 Step one:  find a company with bad characteristics and a catalyst

In traditional long only investing the goal is to own good quality companies with honest management teams, clean balance sheets and solid future prospects. By contrast, when selecting a stock to short sell the desirable characteristics include companies with low or negative growth, high and increasing debt levels, a weak business model, over-valuation by a market, and possessing a shaky management team. However, a critical factor is the requirement for a catalyst; over-valuation or high debt in itself is rarely enough. In Blue Sky’s case it was the negative report from Glaucus. As very few investors have the luxury of lobbing a damming report from the sidelines and outside the regulation of ASIC and the ASX, we would look for events such as a potentially bad acquisition (preferably off-shore), heavy directors selling, or corporate turnover at management level.

Short sellers will then borrow stock from a stockbroker and sell it. They are essentially betting that the price of the target company will decline before they have to replace the borrowed shares by buying the stock back. This is often the step that is ignored in the financial press when talking about shorting a company’s stock, as it is wrongly assumed that investors can borrow stock to reflect their negative view on a company.

When borrowing shares to short sell an investor has to look closely at both the rate per annum that they are required to pay to borrow the stock, and where the owner is located geographically. The rate reflects supply and demand, and for most stocks is currently 0.5% per annum. For stocks where the shorting demand may be higher than the supply (such as Fortescue) the rate may be 15% or higher. In the case of small capitalisation or tightly held companies such as Blackmores, the short seller may be unable to borrow stock and thus cannot short sell.

In the case of Blue Sky, when we looked a week ago there was no stock available to be borrowed and the current short-sold position only represents 3 million shares, or 3.8% of the register. In a small and tightly held company such as Blue Sky most holders would not lend out their stock for short selling as to do so they would be providing short sellers with the ammunition to bet against their long position.  For example, BigUN – which is currently suspended on the ASX in February due to accounting irregularities – only had 500k of their outstanding shares lent out to short sellers, which is a mere 0.3% of the register. In the lead up to BigUN’s suspension as its share price was falling, the demand to short this stock would have been intense, but there would have been no stock available to be borrowed.

The short seller is required both to return the shares to the owner when requested, and also to pass on any dividends paid. We also strongly prefer to borrow stock from foreign owners such as large index funds like Vanguard or State Street, as if you borrow stock from a domestic owner and a dividend is paid, short sellers are required to compensate the original owner for both the dividend and any associated franking credits.

What happens if the stock goes up?

If the short stock rises sharply, the lender will be required to give their broker additional collateral, or the broker will require the short seller to close out the short sale transaction before the planned timeframe.  A series of urgent requests to wire cash to your margin account to cover a short-sold stock that is rising sharply will test the mettle of even the most hardened short seller. In contrast, a long only position in a falling company can mentally be filed in one’s bottom drawer until it eventually comes good (or goes into administration).

This gives rise to the skewed payoff ratio from short selling, where the maximum gain is known (the stock falls to zero), but the maximum loss is theoretically infinite.

It would be wrong to view that short selling risky stocks is a smooth path to outperformance. Keynes, the father of modern macroeconomics, once famously said that “markets can remain irrational a lot longer than you and I can remain solvent’’. This quote particularly resonated with me after an unprofitable short selling of Fortescue prior to the GFC due to concerns about the over-valuation and debt situation of the company.

This trade was put on at $50 per share late 2007 and then was closed out at $70 four months later as the price continued to rise with no signs of slowing momentum. It was very painful to lose 29% in a short stretch of time; however, Fortescue peaked at $120 in June 2008 before falling back to $20 in December 2008. Whilst our investment thesis was ultimately correct, we were unable to handle the pain of a steeply rising stock and the associated unrealised losses and increasing margin calls.

A “short squeeze” occurs when a heavily shorted stock rises sharply, forcing sellers to close out their position by buying back stock, thus causing further upward price momentum. Often when the market appears to overreact to a small piece of positive news, this is a short squeeze and it is similar to too many people trying to fit through a door.

For example, if JB-Hi Fi (currently 17% of the register have been “borrowed” by short-sellers anticipating that the price will go down) or Domino’s Pizza (18% of short) were to receive a takeover bid, the price would escalate sharply as short sellers look to cover their positions. A nightmare scenario would be a contested bidding war if you are short. In December 2017 we saw a short squeeze in Westfield when a bid from Unibail-Rodamco came through. However, unlike Dominos or JB Hi-Fi, the percentage of the property trust’s outstanding shares that we sold short was not a large amount, though we did see a spike in the share price that reflected the short sellers buying back stock to exit their positions.

While short selling is often criticised and retains a negative connotation in a securities industry that is inherently biased towards optimism, we see that it serves a valid role in financial markets. Short sellers provide an alternative view and can aid both liquidity and price discovery in stock markets. In coming years – with MiFID II (new European regulations on stockbrokers) reducing the incentives for the investment banks to put out negative research and the decreasing value placed on sell side research – shorting will provide an alternative view. 80% of calls are buy or hold!

Investors should not look at situations like Blue Sky, BigUn or Slater and Gordon and view that it is an easy way to make money, nor that it is unfairly ganging up on a company. Even very experienced and adept short sellers such as Glaucus have made mistakes. For example, its shorts on Japanese trading house Itochu would have cost the fund manager substantially, with the price up +43% since they released their report in mid 2016.