In finance, there is a vast industry of market experts that attempt to provide guidance as to future moves in share prices. Often their predictions are based on nebulous macroeconomic factors such as concerns about rising bond yields or market attitude to risk. These factors, however, rarely have a significant impact on the inherent valuation of an individual company. Whilst sell-side analyst reports are a great source of background information on factors influencing a company, they rarely are able consistently to identify near-term structural issues that cause large share price moves.

We see that a consistently underappreciated source of intelligence as to the future prospects for an individual company is trading in that company by insiders. Often large and unusual insider selling can be the “canary in the coal mine”, occurring before a significant fall in the company’s share price. In this week’s debut piece from Atlas Funds Management, we are going to look at trading by insiders and how to interpret trade notifications. We are not going to look at the illegal act of insider trading per se, but rather how trades by key personnel can help frame an investing decision. We see that while management teams can publicly minimise challenges the company faces, they can tend to be more cautious when it comes to their personal holdings. 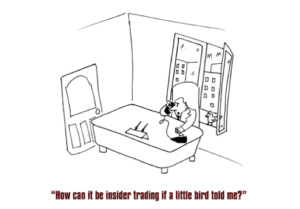 Insiders required to report trading activity are key management personnel, defined by the Australian Accounting Standards Board as “those persons having authority and responsibility for planning, directing and controlling the activities of the entity, directly or indirectly, including any director of that entity”.

The ASX listing rules in conjunction with the Corporations Act require that key management personnel notify the market within five days of changes that occur to that person’s holdings in the listed company. These changes are posted to the ASX and quite helpfully are collated in the financial press daily in the back of the markets section. Additionally, ASIC requires that substantial investors (defined as those who own greater than 5% of a listed company) are required to notify the market of a change of 1% or more in their holding.

Most investors agree that it is generally beneficial for directors and key employees of a listed company to own securities in the entity. Many investors, including Atlas, view it as negative when researching a company where directors or senior management own minimal shares in the company. We are usually not persuaded by the justifications provided, such as that this “gives the directors greater independence” or that “they have enough financial exposure to the company”.

Investing alongside other shareholders gives key personnel a bigger stake in the success of the entity and helps to align their interests with the interests of investors. The downside is that these insiders will often be, or be perceived to be, in possession of “market sensitive information” or “inside information” concerning the company that is not generally available to other investors. These insiders also have legal obligations not to engage in insider trading or market manipulation and not to use information acquired as a director or employee to gain an improper advantage for themselves.

Examples of sensitive information include dividends, a financial outlook that differs from consensus, upcoming litigation, regulatory investigations, or changes to the company’s structure such as dilutionary capital raisings.

Key personnel face powerful temptations to sell shares when they come into possession of negative information or deeper concerns about factors influencing the company’s business that may cause large falls in their personal wealth.

Typically, insiders frame their decision to sell large percentages of their holdings in the company as motivated by stated desires to rebalance their portfolio, buy a beach house or – my personal favourite – to pay a tax bill. Just prior to the GFC, the CFO of a major financial services sold the bulk of his holdings in his company. When asked about it he explained that this was due to the tax bill he faced due to the recent exercise of some options. After calculating that his sales were approximately ten times the tax bill he faced, we also decided to reduce our position in the company.  Whilst I am not suggesting any impropriety occurred in this case, over the next 9 months the company’s share price did fall 50%.

2016 was a banner year for the informational value of insider trades. Organic infant formula producer Bellamy’s has faced a challenging 2016 due to a “temporary volume dislocation” in China due to regulatory changes. Whilst the market was aware of these issues for the bulk of 2016, it appears that Bellamy’s CEO and Chairman had a superior appreciation of the challenges the company faced than equity analysts, when they reduced their holdings of the former market darling in August. The company was suspended from trading on the ASX for a month over the Christmas period and now trades at half the level it did in early December.

Liver cancer drug manufacturer Sirtex’s CEO sold a large proportion of his shares in the company in November for taxation reasons. Similarly this proved to be a good indication for shareholders also to lighten their holdings of the company as it occurred one month before a trading update in December that caused Sirtex’s price to fall by 47%.

Construction software group Aconex continued this in 2017, with a 30% earnings downgrade earlier this week that caused the company’s shares to open down 45%. This downgrade was attributed to uncertainty around Brexit and Trump’s election (two factors that have boosted equity prices globally over the past three months), though we note that the two executive directors were reducing their holdings in August and September in 2016.

The news is not always grim

One of the most powerful buying signals for investors is when directors and management are buying their own stock in the market. To detect this in the ASX notices, it is important to determine that this buying involves their own money and not simply the granting of stock due to achieving performance hurdles. However we would question the strength of the signal when management of a very troubled company symbolically add to their holdings in what seems like a gesture to shore up fractured confidence. A famous example of this occurred in 2005 when the CEO of embattled carpet manufacturer Feltex interrupted a torrid analyst briefing to place a call with his stockbroker to buy shares.

We see that the better indicator is where management in a stable and growing company are buying their own stock on the ASX.  Several years ago, I was a little nervous about my position in an industrial company after their share price had risen 30% over the previous few months since I had purchased the position. Whilst the published outlook from management was positive, I noticed that most senior personnel were also increasing their investments in the company despite this rise. Over the next four years the company’s share price increased tenfold.

Company management teams invariably present the most positive view of the company that they represent, as the personalities of the individuals that make it to the top of large companies are almost always positive and hardworking. Whilst we would not advocate trading by insiders as the sole rationale for making an investment decision, if an investor is nervous about either the valuation of a stock held or the implications of a significant change, we see that selling by management or directors is a strong indicator for investors immediately to review their holdings in that company.